A follow up to this post about new APs leading to a much worse experience for users…. perhaps no surprise things were more complicated. There are more bugs.

Whilst there’s more work to do on the power output question…. With settings changed some users were now happy, others less so. Some APs now had a healthy mix of 2.4GHz and 5GHz clients but at least one AP had never had a 5GHz client in its short deployment life of a week.

We’d previously spotted something on the Aruba mobility controller that suggested there was lots of activity on the 5GHz channels, even though we knew there weren’t many clients. This was put aside with the discovery the power output wasn’t quite what we expected. Now, with one AP that had seen no 5GHz clients at all there was something else to go at. 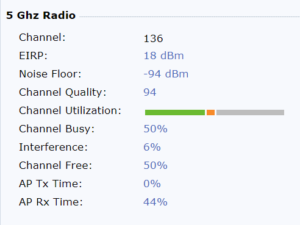 ArubaOS provides shed loads of information about APs, their radios and their clients. Often there’s far more information than you know what do with, but that’s another story. In depth radio stats are available, and most of them are nicely understandable. They give a few clues as to what might be going on.

There’s a lot of information here, but one line that caught my eye was the Tx Failed Beacons count.

An AP sends out beacons frames regularly at predefined intervals, usually every 100(ish)msec. To transmit the beacon an AP has to contend for access to the wireless medium, just like any other station wanting to transmit, so if the channel is busy the AP won’t be able to transmit it’s beacon. No biggie, this probably won’t happen very often. This AP had recently been rebooted, yet the count of failed beacons was so high that a quick calculation confirmed it was pretty much all of them.

So although everything looks fine superficially the AP just isn’t working on 5GHz, it isn’t transmitting any (many, it turned out) beacons.

I setup another AP of the same model on my desk and was quickly able to confirm the behaviour. All the basic parameters of the AP reported that it was just fine, but the channel utilization was high and the failed beacons count was climbing.

Using Ekahau Site Survey with a Sidekick spectrum analyser I could see there wasn’t another AP on the same channel, and in fact there was nothing else using the channel. I could see the AP’s BSSID disappearing periodically as it failed to transmit beacons and the Ekahau software lost sight of it and removed it from the list.

So we know the channel is clear yet the AP reports it’s busy. Also, the AP is reporting channel utilization rather than noise. As we can see both with the Ekahau Sidekick it’s possible to be confident this AP just isn’t working properly.

Software upgrades of a network in use 24/7 are a tricky issue. We try not to fall too far behind, but we can’t just upgrade every time there’s a new release. We don’t like to be on the ragged edge latest release with our production controllers and so will schedule software upgrades during quiet times when the majority of the campus is quiet.

Unsurprisingly we’re a few minor releases behind at this point. Perhaps even more unsurprising is that we’ve found a defect description that sounds rather familiar.

Sure enough a test of the circumstances on both our production and development mobility controllers proves this is a bug in the production code, and so an update is the order of the day.

Perhaps one moral of this story is it does pay to keep an eye on the release notes as they come out. It’s worth scanning through the fixed and known issues so that if you suffer from a problem, something deep in your brain might just spark that you’ve seen something about this somewhere before. That said, the ArubaOS 6.5.4.5 release has pages of fixed bugs, far too many to remember what they are.

This website uses cookies to improve your experience while you navigate through the website. Out of these cookies, the cookies that are categorized as necessary are stored on your browser as they are essential for the working of basic functionalities of the website. We also use third-party cookies that help us analyze and understand how you use this website. These cookies will be stored in your browser only with your consent. You also have the option to opt-out of these cookies. But opting out of some of these cookies may have an effect on your browsing experience.
Necessary Always Enabled
Necessary cookies are absolutely essential for the website to function properly. This category only includes cookies that ensures basic functionalities and security features of the website. These cookies do not store any personal information.
Non-necessary
Any cookies that may not be particularly necessary for the website to function and is used specifically to collect user personal data via analytics, ads, other embedded contents are termed as non-necessary cookies. It is mandatory to procure user consent prior to running these cookies on your website.
SAVE & ACCEPT